All Blacks to the Nation 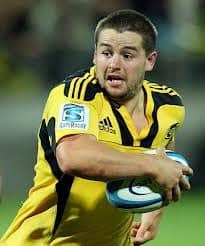 All Blacks to the Nation

ALL BLACKS to the Nation

A group of All Blacks will again fly around the country into provincial New Zealand next week in the latest instalment of their All Blacks to the Nation tour – with five regional centres to enjoy a visit.

In keeping with a tradition started in 2011, and with the support of the team’s airline partner Air New Zealand, the All Blacks will this year spend Thursday 7 August having fun with various schools and communities in Paihia, Rotorua, the Kapiti Coast, Greymouth and Ashburton, before they assemble in Auckland to prepare for the opening Investec Rugby Championship Bledisloe Cup Test against Australia.

The Horowhenua Kapiti Rugby Union, town authorities and All Blacks support staff and Air New Zealand have been working for months to plan the All Blacks visits around the country. A range of activities is being organised in the towns, including school visits, civic events, autograph sessions, fun activities with kids, Rippa rugby games and hospital visits. Just which players will be visiting which towns will be announced next week.

Air New Zealand Manager Sponsorship and Communities Meghan Blair said: “As New Zealand’s national airline, we are very proud of our longstanding sponsorship of the All Blacks and regularly fly the team around the world.  It’s a privilege to be flying the boys around regional New Zealand next week to get out and about in some of the communities we operate to.”

All Blacks Manager Darren Shand said heading to towns that did not usually host All Blacks was one small way the team could acknowledge the support from loyal fans in the provinces.

“We really appreciate the support of our fans and we know it’s sometimes harder for fans in the smaller towns to get to see the All Blacks.  So we are taking the players to them. The players really look forward to the day and always come back into camp buzzing after their day out.”

Shand said many players in the current All Blacks squad could relate to fans from small-town New Zealand.

“People forget that quite a few players in the team come from small towns, including Richie who is from the North Otago community of Kurow, so they certainly relate to fans in the provincial heartland.”

Other All Blacks from smaller towns include hooker Dane Coles who is from the Kapiti Coast, lock Brodie Retallick, who hails from the North Canterbury town of Amberley, his locking partner Sam Whitelock, who is from the Manawatu town of Linton, halfback Aaron Smith, who grew up down the road in Feilding, loose forward Sam Cane, who calls the Bay of Plenty town of Reporoa home, and first five-eighth Beauden Barrett who grew up on a farm in the coastal Taranaki town of Pungarehu.

Meanwhile, more than nearly 87,000 tickets have already been snapped up by fans for the All Blacks last three home Test matches – against Australia on 23 August in Auckland, Argentina in Napier on 7 September and South Africa on 13 September in Wellington.

Over 43,000 tickets have already been sold for the much anticipated second Bledisloe Test match at Eden Park Test, with just under 5,000 tickets left.  In Napier, nearly 19,000 of the 21,900 seats have been booked up by fans for the Hawke’s Bay’s first All Blacks Test match in eight years. Wellington will close out the domestic Test season with the mouth-watering clash against South Africa, with fewer than 5,000 (out of 33,000) tickets still on sale.

Summary of All Blacks provincial visit to HK

The Horowhenua Kapiti Rugby Union are proud to announce that the All Blacks will visit Otaki College, as well as Waikanae and Paraparaumu Beach Primary Schools, before finishing with a community meet and greet event 2.40pm led by Air New Zealand at Paraparaumu Airport.