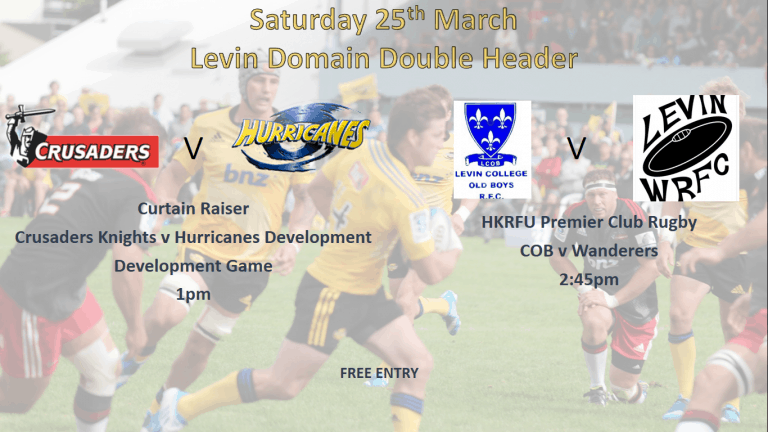 The Levin Domain will play host to two mouth-watering clashes on Saturday 25th March, when the Hurricanes Development play the Crusaders Knights as a curtain-raiser to the HKRFU Premier Club Rugby local derby between Levin College Old Boys and Levin Wanderers.

Horowhenua Kapiti Rugby Union CEO, Corey Kennett, is pleased to be able to host a fixture of this nature in Levin. “To be able to facilitate this game is very satisfying, and on the back of our partnership with the Hurricanes, we are excited to be able to offer another Hurricanes fixture to our rugby community. This will be a great opportunity to check out some of our countries best up and coming talent on show in Levin, with several Super Rugby players set to be involved.”

Horowhenua Kapiti Rugby Union CEO, Corey Kennett, is delighted to welcome the Hurricanes into Waikanae. “To be able to facilitate this training in Waikanae is very pleasing, and on the back of our partnership with the Hurricanes, we are excited to be able to offer events such as these to our rugby community. This will be a great opportunity for our younger generation to mix with some of their rugby idols on the very same ground that many of them play their Junior Rugby on.”The main event for Saturday’s double header, or as some would say the “Battle of the Domain”, kicks off the 2017 HKRFU Premier Club Rugby season in Horowhenua Kapiti. Levin Wanderers will be looking to improve on last year’s results and with a lot of youngsters in last year’s squad, improvement is imminent. Levin Wanderers put in some good performances at the recent RD1 Shannon 7’s tournament and will be looking to build from this. Last year’s beaten finalists, Levin College Old Boys, will be hoping they can build on last year’s performances when they kick-start their 2017 campaign. Levin College Old Boys are aware of the threat the Levin Wanderers pose so will need to continue to improve or could find themselves on the wrong side of the score line after 80 minutes.

In the other HKRFU Premier Club Rugby games for the opening round, 2016 Ramsbottom Cup winners Paraparaumu take on Foxton at Easton Park, with many regarding Foxton at home as one of the toughest away trips of the year. RD1 Shannon 7’s tournament winners Waikanae will be looking to continue their strong early season form and as always will be a very tough side to beat when Shannon travel to Waikanae Park in the opening round. In the final game of Round 1, a resurgent Rahui team return to the Premier grade to take on Athletic at Otaki Domain. 2012 was the last time Rahui entered the Premier grade so it’s fantastic to see them back in the competition, while Athletic who will once again be pushing for a top four spot this season will be hoping to spoil the party for Rahui.

All HKRFU Premier Club Rugby games kick off at 2:45pm.