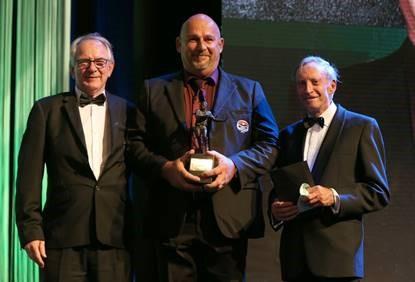 Congratulations to Dean File, who was named as the Charles Monro NZ Rugby Volunteer of the Year at last night’s Steinlager Awards in Auckland.

Dean’s contribution to Shannon RFC has been nothing short of outstanding. Dean is the current Shannon RFC Chairman, along with being the bar manager and Premier Team manager. Dean is also the main driver of fundraising for Shannon RFC and is the Chairman of a working party which was introduced to sustain the Shannon Domain facilities with other organisations. Earlier this year, Nat Manville was tragically injured when playing a 1st XV game for Awatapu College. Upon discovery that Nat Manville was a Shannon RFC junior player, Dean led a fundraising charge that raised over $10,000 towards the Nat Manville appeal. Dean has also built a database for retaining players, which means that if they are ever short of a player, it is very light work to find another one.

Horowhenua Kapiti Rugby Union CEO, Corey Kennett, was pleased to hear the news. “It’s fantastic to see Dean recognised and rewarded for all his years of dedicated volunteer service to Shannon RFC. We are delighted to have Dean in our rugby community and like so many of our other volunteers, doing it for the love of the game.”