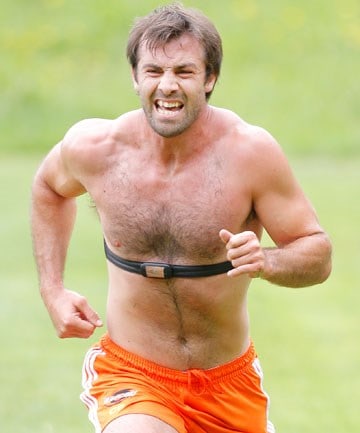 Even a flogging at the hands of the Hurricanes fitness trainers couldn’t wipe the smile off Conrad Smith’s face.

Ten minutes after his first Super Rugby training session of the year the All Black centre was happily chatting to two local schoolgirls as he signed the backs of their T-shirts at Rugby League Park in Newtown.

Smith’s carefree demeanour wasn’t because he conveniently returned to work this week a day after his team-mates had been flogged by the New Zealand Army in an all-night test of their mettle.

It’s because the 32-year-old is entering 2014 more mentally fulfilled than possibly any time during his long and glittering rugby career.

”I loved it. I wish I could do that every year. Having three months away from the game worked a treat,” the Hurricanes skipper announced yesterday.

”Even though its a pre-season game tomorrow I actually wish I was playing. I know this time last year I was thinking, man, I’m glad I’m not playing these games, and that’s not the way you want to be.”

Smith’s enthusiasm is borne of his marriage to Lee-Anne Snowdon in Taranaki and a second stint in Kenya where he was able to see the fruits of the charity work the pair did in 2012.

”Married life got off to a great start with a three-month holiday, so it’d be a problem if I didn’t enjoy that,” he said. ”The wedding was great. It went really well and its been a cool few months.”

The pair tied the knot, minus the fan fare of a women’s magazine deal, in Taranaki, and promptly resumed their shared passion for travel.

”We travelled from about three days after the wedding until I got back on Monday, so its been a solid three months,” Smith said.

Central to their journey was a return to Aberdare Ranges Primary School in Nakuru, Kenya, a school built by the charity So They Can for children who live in poverty.

Smith visited the area after helping the All Blacks win the Rugby World Cup with his then-partner, helping to paint the classroom and getting  to know the local children.

”We went back to Africa and had a look around again. We went back to the school and that was cool,” Smith said. ”It’s amazing what the charity has done over there and it was neat for us to see how far it’s come in a couple of years.

”It was shorter this time and we were with a group that runs the charity at quite a high level, so it was more about looking at what’s been done and we were just there to observe.

”It is satisfying. The people who do it are inspiring, people who take out two years and more of their lives to go and work there.”

Smith then forged on to Europe for Christmas then came back through Southeast Asia for a friend’s wedding.

The result is he’s desperate to resume his day job as a rugby player.

”Looking back compared to this time last year I wouldn’t say I was tired or not excited about playing the [first preseason] game, but its just different.

”I did the same thing after the World Cup, but other than that since I started playing you just don’t get that time off and its amazing what it does and how much better I feel.

”It remains to be seen of course, there’s still as much chance I get knocked over [injured] as any time, but the thing is I’m really looking forward to the season, which is where you want to be.”

As always Smith’s returned as fit as a fiddle.

”I’m naturally like that. I can’t sit around for too long. I enjoy myself more when I’m doing a bit of regular exercise.

”You can never reach the intensity of what it’s like with a trainer barking in your ear all the time. I haven’t had that for three months, so I’ve got a bit of work to do, but in three weeks time I know I’ll be ready to play.”

He won’t play against the Blues in Masterton today and is undecided on whether he’ll travel to Geelong for the second match against the Melbourne Rebels (February 8), but will take the field against the Crusaders in Levin on Valentines Day.

Smith said he would take the next week or two to get to know the newer players in the squad and get a feel for the work done while he was away rather than try and charge in and take over as captain.

”For a week or two I have to observe that and see where I fit in. It’s not my place to try and change anything.

”It’s a continuation of what’s happened the last couple of years and I’ve been pretty excited about that.”

Smith acknowledged the public’s expectations after two years of building a new side, and said the players had set their own bar equally as high.

”There are 15 teams, it’s a tough competition and you look at the New Zealand conference and there are four other teams with huge ambitions, but that’s what it’s about.

”If we are realistic about our goals we want to achieve some pretty high ambitions. It’s being smart, starting well and building from there.”