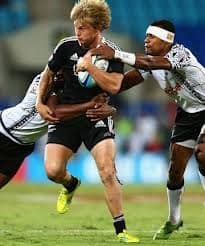 I had the pleasure of interviewing our very own Warwick “Wizz” Lahmert who last weekend made his debut for the All Black Sevens team. Warwick played his junior rugby for Waikanae, Secondary School rugby for Paraparaumu college, U21s for Athletic RFC before returning to Waikanae to play his Senior Club rugby. After playing Heartland and Sevens rugby for Horowhenua Kapiti he made the move to Taranaki where he is currently playing his club footy. Below is the interview with our latest star.

1. Where were you when you received the call you had made the team?

Wizz – We were still in camp and on the Thursday morning we had a team meeting and Gordon Tietjens named his 12 players for the GC tournament. I was the 10th name to be read out.

Wizz – My position in the team is hooker, not my normal position in sevens as I am normally halfback. My role is to defend and steal the ball.

3. Is Gordon Tietjens trainings as hard as everyone says it is?

Wizz – Yes, they are correct. His trainings are the hardest trainings I’ve had, and after the team for Gold Coast was named the trainings got even harder. We did alot of Full field stuff, training where we were constantly running. We were wearing player GPS and one training we clocked up 6km.

4. What was the feeling when you first put on your All Black Sevens Jersey?

Wizz – Words can’t describe the feeling. I remember going into the changing room and seeing my Jersey, my last name on the back of the jersey, the number 10 which is also my favourite number. It was an amazing feeling and a dream come true.

5. When you were growing up was there anyone who made a big impression or had an influence on your rugby career?

Wizz – Mum, dad and my partner have all helped me with my career. I remember when I was playing Waikanae Under 7s my coach Ged Eller (HK Primary Schools delegate).

6. Why do you remember Ged Eller?

Wizz – I remember him because he gave me full games and I always use to get player of day ribbons.

7. What are the plans for the end of the year?

Wizz – We will be getting our programmes soon and for the next 4-5 weeks be preparing for camp to hopefully make the team for Dubai Sevens.

8. Do you have any words motivation for young Horowhenua Kapiti rugby players?

Keep working hard and never give up, if you really want to make it you need to work hard to get their.

Thank you for taking the time to chat and best of luck with the future.